I sat in the opening session of the workshop this evening, feeling great accomplishment.  I did it!  I rode from my house in Philomath to Esalen (save the last 6 miles, as you‘ll see below).  I listened to everyone‘s introduction bios, and felt it was time to brag a little.  My bio in 40 words:  “Ocean is his real name, regardless what his mother thinks.  He left Oregon for this retreat 24 days ago on his bicycle, working on an interview for the Sun enroute.  Of nearly 1000 miles, only the last 30 really sucked.“

This morning the irony had not escaped me that the conclusion of this journey was now marked by the very illness that served as the catalyst which originally set me on the path to recovery.  Yes, I definitely had a head/chest cold, and I still had almost 50 miles to ride today to reach Esalen and the workshop.  On top of that, right as I hit the hills around Big Sur I also ran into drizzle, which then became dense fog.  But ride on was my only option, so I pedaled on.  Then the drizzle became rain, and I got wetter and colder.

I decided to take a break in Big Sur, stopping at a restaurant which had a warm fireplace.  I stayed there, drying off, hoping the weather would break.  It seemed to clear up as I resumed the ride, but after crossing over the hill and back down to the coast the fog became even denser, and the light was fading.  This was bad.  I could barely see where I was going, which meant the cars couldn‘t see me much better.  I had 6 miles to go.  I crept forward, inching up hills and braking on the way down, not able to see much more than 10 or 20 feet ahead.

“Pull onto the shoulder“, came a voice from behind.  I was being pulled over by a CHP officer!  He said he could barely see me.  “It‘s not illegal for you to be out here.“  I agreed that it was ridiculous and dangerous, but I had to get to Esalen.  Then he offered me a ride the last few miles.  I gladly accepted and took a ride with CHP, eyeing his automatic rifle and high tech communication equipment. I pondered the fact that this was definitely one of the few circumstances it feels good to be in the back of a patrol car.

I thanked the officer as he dropped me off and rolled into dinner at Esalen.  But first a quick soak in the springs, which as you can see in the picture below are right above the waves of the Big Sur coast – more pictures tomorrow when it’s light. 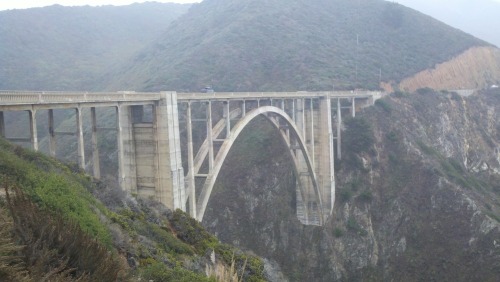