It’s going to be a short day riding. I’m heading just over the hill from San Luis Obispo, to an uninspiring campground run by SLO County, just a long block from Pismo Beach. I usually spend a good part of the day in town at Kreuzberg’s. Will be a good chance to get caught up on the blog, now several days behind in my postings.

I’m packing up my gear, getting ready to ride. I look at my bicycle, the flags and bells, thinking maybe I should take them off. I don’t want to be such a spectacle, I hear in my head. A spectacle. As if touring thousands of miles by pedal power isn’t already a spectacle. No, I’m thinking the flags and bells just aren’t cool. I really try hard to be cool. Here, with all this flapping color and tinkling ringing bells, I’m seeming more like a fool than those cool cyclists.

Maybe it’s that I’m heading into Southern California, where weird isn’t as acceptable. Where the passing cyclists already aren’t very friendly. Now, they’ll look at me and roll their eyes. Maybe motorists will think I’m one of those crazy homeless guys, riding endlessly around on their bikes. With these thoughts, I reattach the bells I’ve started to remove. Double down on flying my colored flags. Damned the conventions, I’ll be a spectacle! After all, spectacle is the root of the word spectacular, is it not? And this tour, as all tours go, is most spectacular!

With that, I’m soon riding along Morro estuary, rejoining Route 1, flying with a tailwind towards SLO. Along past the California Men’s Colony, maximum security. I think of all the Sun’s incarcerated readers, one in particular who wrote “Your Despicable Correspondent”. I wonder what it would be like to stop there, go visit this inmate, maybe bring him a copy of Sy’s new book. Maybe next time.

One more climb, then the long descent into town. I roll down the narrow streets, straight in to Kreuzberg’s Coffeehouse. Flags flying, bells jingling. Spectacular spectacle that I am. I’m going to stay here a long time, get some writing done. I settle in with my coffee and a morning bun. Is this the newest pastry rage? I see them everywhere. Puff pastry rolled with cinnamon sugar. Ah, the cinnamon, an ode to Christmas. The Kreuz has been upgraded. Gone are the overstuffed chairs, replaced by narrow bars and short industrial style stools, no doubt from IKEA. Looks like Portlandia has arrived in SLO. Far too many laptops, everyone working, or are they just on social media, trying to make their stand?

I’m set to write. But nothing comes. I recall again Sy’s expression of resignation at his own gap in writing, over two years now I think. And what Francis said on the panel, when asked what the greatest obstacle to writing was, wondering if it was irrelevant, what if what she has to write no one will be interested in reading. That’s it, isn’t it? Why so many are struggling, why social media is able to grab our interest with an addictive vice grip, as we post image after image of forced smiling selfies and dogs and food and anything, but no words, no writing, no thinking, and no real feelings. Hashtags, shorthand, clickbait. Don’t we all feel irrelevant?

Just last year, in Sy’s closing talk, he challenged us all to write, from the heart, whatever is alive and authentic, stating “the truth of our experience is where the fire is.” This has been my struggle on tour in 2018, and in my life. To express what is true, what is alive. Because, I don’t think anyone will want to hear me. Even here, on this oft too revealing blog. (Those regular readers will note how many days behind I am on postings. Thank you for your patience.)

No matter. I’m getting caught up. I’m telling my experiences again, regardless of whether my boring or anxious ramblings are relevant, or will make me a spectacle. I’ll be spectacular in my mundanity. And thus, hours go by at the Kreuz, nothing written, too much time on Facebook. Wandering thoughts, wondering. I sit until I can’t stand it any longer, then head out, flags flying. It’s a long descent, all the way down the strip, then through a narrow valley, past oil wells and sagebrush dotted hills, until I reach Pismo Beach.

I continue on to Oceano, but don’t set up camp right away. I head west instead, down that long block to the beach, where I sit with an IPA and make a picnic lunch, watching all the cars and trucks and Westies driving out on the sand. This is one of the few beaches in California where people can drive right up to the surf. Why they want to do this escapes me. I chat with neighboring sunset worshippers, a man whose girlfriend works at that pirate bar in Bandon. Ha, what a small world.

The sun breaks though as it dips beneath the clouds, shining a brilliance onto the traffic filled beach. Nature’s fireworks in the sky. A calm seems to set in, cars and trucks driving very slowly to and from the beach. I wait until the colors fade, then head over to the RV park. I set up in the hiker biker, bitten by aggressive mosquitoes. I don’t remember these from previous tours. Then again, California is no longer in that long drought.

I’m fading off to sleep when the Amtrak rumbles through. Loud, but soothing, I think of the train ride that I’ll take at the end of the tour. I’m nowhere near to being ready to go home yet, still so much more spectacular riding ahead. 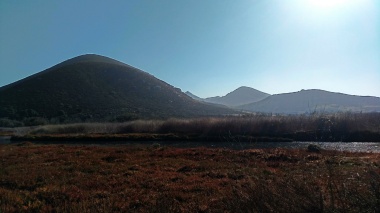 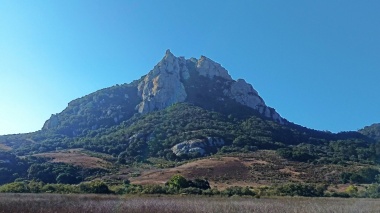 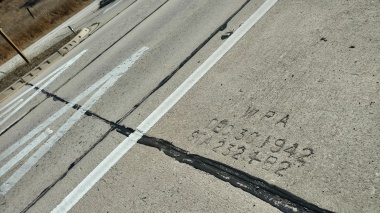 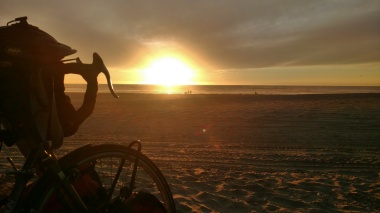 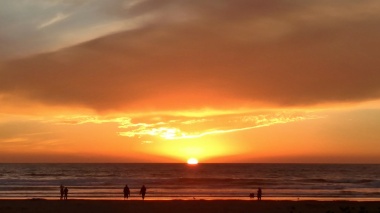 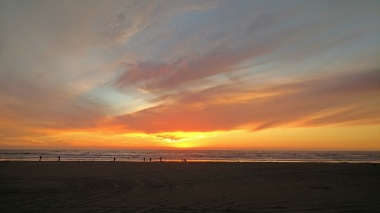