So well rested, staying on my sons’ couch in Oakland. Sleeping, eating great food by Chef Seth and other favorite dining establishments in East Bay, watching Oregon football, Terminator 2 and the Dragon Prince, blogging and surfing and hearing poetry and talking with friends. I can’t believe how long I slept.

At last, after two days, I’m needing to head south again from San Francisco. I loll around this morning, not wanting to leave. My boys, now approaching their 35th birthday, are my family. I recall how stunned I felt after they moved down to Oakland, the end of 2016. I hadn’t realized how much I would miss them. Now, after this short visit, I’m feeling so strong this longing for family, the bond that lasts a lifetime. I’ll be back, I know. I usually make another stop in San Francisco before heading north to Oregon.

Seth makes me a great breakfast and packs me some food for the road. I load up my bike, bid him farewell, then roll a block over to the MacArthur BART. I catch the train to Daly City, where I begin my ride south on 35. Rolling hills past beaches and short roofed houses, all painted in the whites and pastel colors of San Francisco.

I make the long climb, then rapid descent to Pacifica, stop at the Chit Chat Cafe. It’s a warm day, mid-70s. I’m startled, usually expecting a cooler ride. My legs feel strong again, ready for the long miles ahead. Rest does wonders after so many days of uninterrupted riding. On through Pacifica, I make the hair raising climb up Highway 1 to the San Mateo pass. The road surface has been redone, adding only slightly more pavement to the right of the fog line. Traffic is mercifully light as I bear down and pedal as fast as I can up the hill.

Just near the crest, I turn onto the Devil’s Slide Trail. This pedestrian/bicycle path, full highway-width, is the old Route 1 before the bypass tunnels were completed. A bit more climbing, then the long descent on the trail, at one point 9% grade. I stop and drink in the stunning views of vast ocean, steep cliffs, blue skies. I relish how very quiet it is, just the wind whistling through my helmet, the conversations of the few hikers, and the gentle surf far below. Ah, if only the whole route were so quiet, protected, pristine.

The trail ends too soon, and I rejoin busy Route 1, rapidly descending with traffic close behind. After a mile, the road widens past the Montera Lighthouse. Just a few more miles to Half Moon Bay and my camp for the night. I pedal easily with winds at my back as Route 1 follows the coast past Grenada. I exit at Roosevelt Beach and follow a bike trail to Half Moon Bay State Beach.

I arrive at camp to see many cyclists already there and set up. I shouldn’t be surprised, many cyclists begin shorter tours from San Francisco to LA with this first camp. But I’ve got that antisocial feeling again. Entering into my own space again, processing emotions and thoughts, not wanting to face the work of opening up to strangers. I know later this will change, after camping a few nights at the same spots, I’ll likely feel kinship and connection. But for now, I’ll just allow myself the room to feel vulnerable, self protective.

The sun sets over Half Moon Bay with a breathtaking display of colors. The surf is relentless as it pounds the shore. I watch a long while as the colors fade, and note the quarter moon, due south. Another week to the full moon, Esalen night bathing will be brilliant this year.

I retire to my tent, laying in my warm sleeping bag. I hear the fog horn in the distance, and feel the waves through the ground as they land hard against the shore. I feel a deep longing, for my beloved, for my family, for my community. Tomorrow, I’ll reach out again. For tonight, I’ll hold my own heart, so tenderly. 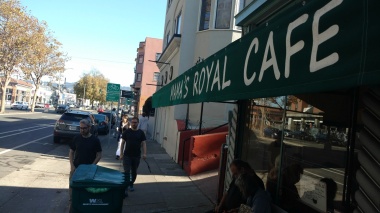 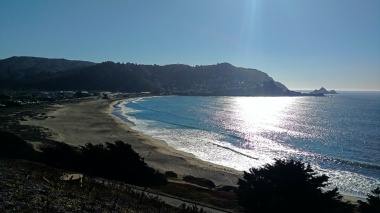 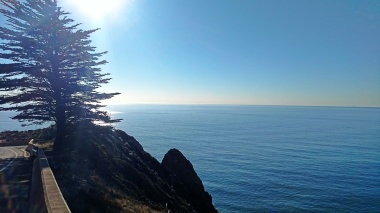 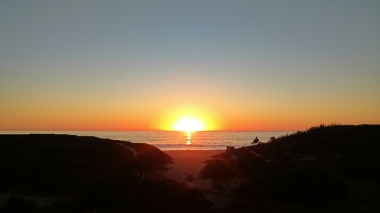 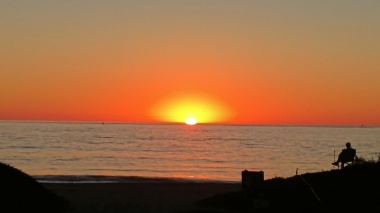 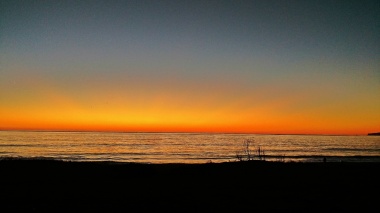 One thought on “South from San Francisco”