A good nights sleep, under the looming redwoods with the soothing sound of the rushing Smith River. I pack up my camp and meet the other camper, an Irish motorcyclist who shipped his bike over. He riding from Alaska to Argentina, seeing all the great American sites along the way. We chat about his travels, trying to buy bear spray in Alaska and being told he needed a gun. He laughed at the clerk, saying he would probably shoot himself, and got the bear spray instead. We talk briefly about the tragedy in Las Vegas, the latest and most extreme mass shooting. He says that America is such a beautiful country, that we don’t know what we have. Yes, seems true.

I bid him farewell, we exchange a hug. He grips me tightly, stronger than any hug I’ve gotten from a stranger before. I appreciate his boldness, and reaching out to me. I think of the feedback I’d gotten on my recent post. One reader took issue with the term “toxic masculinity”, seems it was an unfair description as men aren’t limited to definitions. I’m thinking about this as I ride today, what I’m really trying to say.

I head out on 199, a moderate hill to rejoin the 101. I stop in Crescent City, for a long breakfast break. I’m looking forward to the large hills ahead with some trepidation. I’m feeling wary at being on the road now, two weeks, not taking a day off. Some driving me on this trip, to ride hard and long, blasting down from Seattle to reach Arcata, in just two weeks. A yearning to get my life back on track, to embrace the cycling cure. And it’s working. I’m feeling more present, relaxed, aware, happy. Still moments of grief and anger, as there will be. Now, a freer flowing of my emotions, a center of serenity and calm.

The hills aren’t so hard as I’d imagined. Squiddie asks to stop for a selfie at the 101 sign. Maybe we should call them “squelfies”? He’s such a goof. Nice to take a break after climbing. The descent down to meet the coast again is thrilling. Waves breaking, crystal clear skies, sunlight sparkling off the waves, cool northerly winds at my back. I’m feeling revitalized, pedal on to Klamath, one more stop before the climb to the Prairie Creek Redwoods and my camp for the night. I head out again, stopping at the Golden Bear bridge over the Klamath River. Squiddie wants a closer look at the bears, thinking he can make a new friend. The river is full of blue water, different from the last several tours of drought.

Traffic on the 101 is light, a nice break. Seems easier to pedal, to breathe, to reflect. My thoughts return to the question of toxic masculinity, and what would be a better way to describe what I’m seeing, what I want to happen for men, for our communities, for the world. The question really is what is masculinity? Something innate, something learned, something fixed, something in constant flow, evolution? And from my recent involvement with men’s conferences at Oregon State University, shouldn’t it be pluralize, as in masculinities?

From my work in the pro-feminist men’s movement, it’s clear to me that patriarchy is based upon a concept of masculinity which is dominating, and in many ways toxic or harmful, often violent. The insanity in Las Vegas was caused by a single man, armed at a level not atypical among fans of the Second Amendment. “Right to Bear Arms” often translates into lots of arms, lots of munitions, no limits on the ability to deliver ordnance to the targets. The vast majority of gun fans are nonviolent, obviously, or there would be blood baths like this every day.

However, from a feminist analysis of the epidemic of mass shootings in America, it is clear there is a problem with the demographics of the shooter. In almost every case, a male. A white male. And in Las Vegas, a millionaire. One of the 1% class. What is it about these men, these white men, that cause them to become so unstable, so unhealthy, no unhinged, to act out their inner conflicts is just a lethal and horrifying way. We may never know what causes the individual psychology, since the shooters usually die, from self inflicted wounds.

The process of inculturation by the patriarchy is one of wounding, one of violence. The process starts with pressures from parents, “boys don’t cry”, bullying by peers, images from media, and the dark chat rooms of social media. Perhaps rather than toxic masculinity, we could describe it as “wounding masculinities”, the process by which men are taught to withhold their vulnerability, suppress their grief, act out their anger as rage and violence against others, or against the self.

The pro-feminist approach is to encourage “healing masculinities”, the process of nurturing the full humanity of men, the vulnerability as well as strength, the nonviolence expression of anger and resolution of conflict through communication, not force. Which begins with the healing of the individual, the practice of Ahimsa, nonharming. “Love thy neighbor as you love thyself” assumes first the love of self.

So here I am, on my tour. Remembering how to love myself, even in the context of pushing my body and mind beyond my comfort, into growth and adventure and a fair amount of stress. Perhaps I can back off a bit now, ride a few less miles, spend a bit more time with my journal, my reading, talking with friends I’m meeting along the way. Contemplating my recent losses in relationship, thinking about how to build bridges, connect with compassion and empathy. Practice Ahimsa, nonviolence, in thought, word and deed.

I crest the final climb of the day, on the Newton Drury Scenic Parkway, the old 101, and glide down through grove after grove of massive redwoods. The sense of peace and presence of this place always astounds me, these ancient beings have seen thousands of years on the planet. If they could talk, what might the redwoods tell us? Hey, little humans, slow down. Take some time to rest in my cool shade. Take some time to breathe the clear air. Take some time to sleep upon my roots. Let me watch over you, while you rest. Dream, gentle seeker, of new vistas, of healing community, of long and lasting peace. 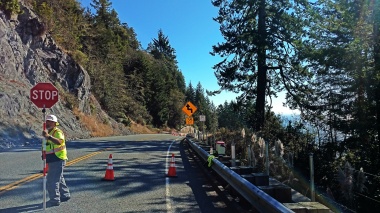 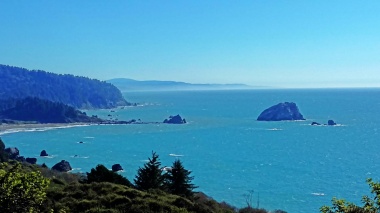 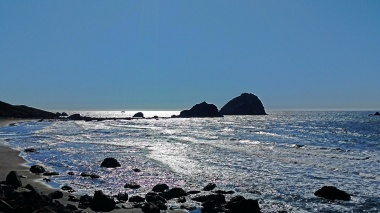 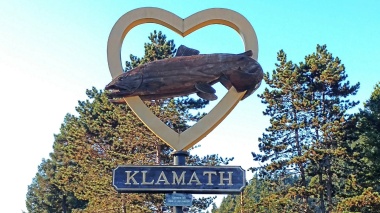 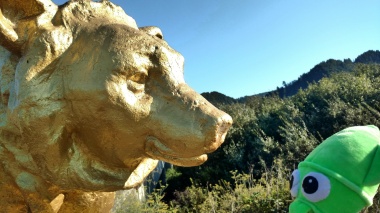 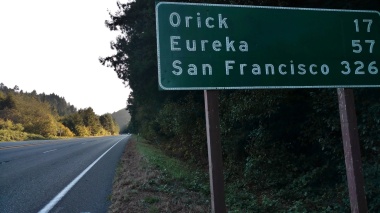