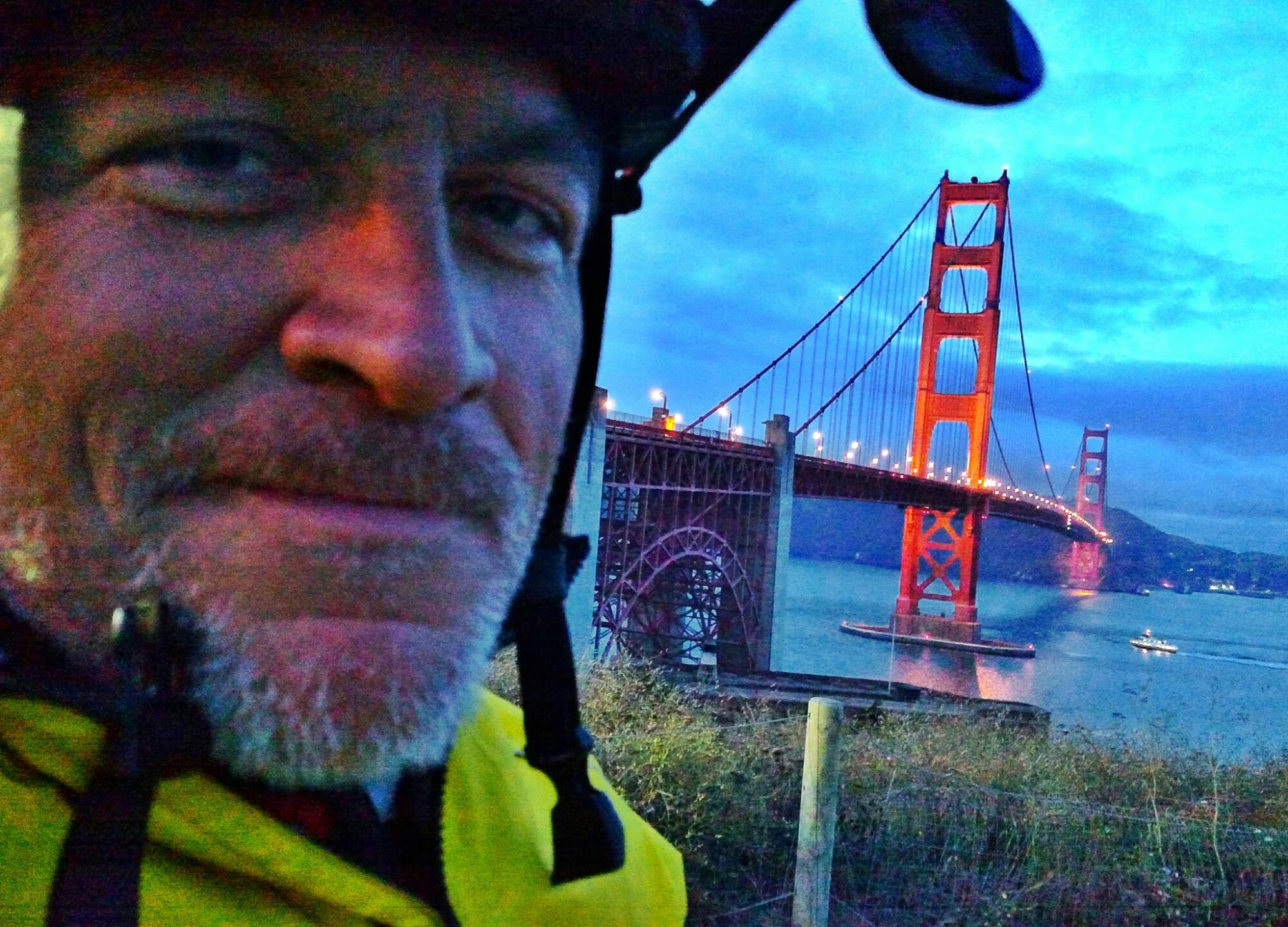 A huge storm is predicted to hit San Francisco on Friday, so I’ve decided to ride all the way into the city a day early, a long ride from Bodega Dunes. I’ve done this before, but today I’m feeling more tired than before. What is it? The constant push from Arcata, riding every day, even with the hills of Northern California. Or the nagging feeling that I’m still heading the wrong direction, given the direction my heart strings are pulling me. No matter, Jennifer has told me to keep riding, she’s fully behind the quest. It’s in my hands, to find the motivation, the determination, the purpose.

I’m up an hour before dawn, packing up, riding out of the darkened camp. I bid Alex a good ride, and know he will pass me along the way. He’s heading to a hostel in Point Reyes, where he’ll wait out the storm and go on some hikes of the national seashore. Dan is still in bed, so I intend to email him a goodbye later.

Off into the foggy morning, the bay has a serene feel, colors muted, a quiet not unlike that after a fresh snowfall. Traffic is light as I ride south, following Route 1 through ranch lands, baked brown by the California sun. My odometer flips to the next thousand, a total of 22000 since I resumed touring in 2010. Seems like a large number, until I consider the daily cyclist I know who hits 10000 annually. I determine to ride more, in my non-touring daily routine.

Alex catches up and passes me, saying he’s headed to the store in Valley Ford. We meet there for coffee and some food a few miles later. He recalls when he rode through here last year. “I had a girlfriend at the time,” he says with a sad smile. Memories of past tours, I’m noticing these all the time. How images and emotions become attached to places and vistas. I’ve ridden this coast so many times, and still new memories surface, every day, at every turn.

Southward, Route 1 winds its way around Tomales Bay, fog lifting and with it the penetrating chill. I pass oyster companies, not stopping though I’d love to. So far to go still. The highway is challenging, winding in and out of coves, climbing through dense groves of eucalyptus with their signature intoxicating pungency. A the end of the bay, the highway climbs and then descends into Point Reyes Station. I stop for a bite, then back on the road. South to Olema, where I turn and climb the big hill.

I turn onto Sir Francis Drake Boulevard and descend long miles towards Samuel P. Taylor State Park. Redwoods now line the highway, which follows a rushing creek through the park. This would have been the stop for the night, at 41 miles from Bodega. Not today, instead just past the halfway point. The highway now climbs past golden hills, a long gradual ascent towards Mount Tamalpais. The last few steep curves over Mount Tam, then a breakneck descent into Fairfax. Signs warn “Bicycles Watch Your Speed”, and I do watch my speed as the mph pushes into the high 30s.

I land in Fairfax and begin the long final 20 mile approach to the Golden Gate. These are city miles, and I roughly follow the Pacific Coast Bicycle Route, with a few modifications. Google would have me climb through Larkspur, but frankly I’ve had enough hills already. I stop at Barton’s Bagels in San Anselmo, lox cream cheese, coffee, courage! Back on the bike, hugging the 101, now a busy 10 lane freeway. The cycle route follows a miles long path through the wetlands of Richardson Bay, and then under the freeway to Sausalito. Here the city comes into view for the first time. I pick up the pace, eager to reach my destination.

The road winds up and through the town, rising steeply on Bridgeway. Lights is beginning to fade, but I know I’ll hit the bridge before sunset this time. One more steep climb for the day, then I see the first views of the tall crimson towers. The Golden Gate Bridge. My heart now picks me up and carries me, racing on under the 101 and past the entry to the Marin Headlands, down to the west side bike path of the Golden Gate.

I roll onto this beloved bridge, awash with the ecstasy of arriving, once again, the hundreds of miles, via pedal power. Blows me away every time. This massive engineering marvel, busy with rushing traffic, bicycles flying past me on the west side, and me, pushing my laden touring machine along, legs tired but strong, so strong. I stop in an alcove along the path, lean over the red railing, looking out to the wide entrance to the San Francisco Bay. Waves crash along steep cliffs of the Marin Headlands, the sunset peeking underneath the looming storm clouds over North Beach.

I’m ready to spring my surprise on Jennifer. I’ve suggested we try Skyping for the first time. A video call. As the connection is reached, I see her somewhat pixelated face come into view, for the first time since we left each other in Bandon. Seems so long ago. We both seem to gasp a little at the sight of each other, end up just staring and smiling, smiling. Even a few tears, awash with emotion. Then I tell her: guess where I am. Not waiting for her response, I turn the camera up to the towers, then pan gradually the bridge, the bay, the headlands, the horizon. What a marvel, this technology which was science fiction a few short decades prior.

Our video call lasts on, with the cooing and sweet words lovers share, punctuated with images of the resplendent beauty surrounding the Golden Gate. I gaze into the phone, see Jennifer’s beautiful smile gazing back, her sparkling eyes, her pretty lips I wish so much to feel against my own. The din of the rushing traffic seems to fade, I now hear only the winds whistling about the bridge, the waves pounding far below, and the dear, sweet melody of my lover’s voice. I’m shuddering, from the cold winds? Or from the surging love in my heart?

The cold wakes me at last from this blissful moment, and I realize I’ve got another hour to reach my destination. We finally break away from the Skype call, I’m sailing now across the bridge, then down along the bay front. Miles to go. I carefully wind my way through the crowds at Fisherman’s Wharf, then jump onto the green bike lands on the Embarcadero. Market Street, BART, now I’m resting, standing in the subway as the car careens under the bay to Oakland and my friend Debra’s house in the hills above Berkeley.

I duck into a Thai restaurant, ravishingly hungry, texting Debra to see if the ride she offered up the hill might still be available. Yes. Whew. I’m so glad as I sit his her car, bike in the back, passenger now the last three miles up the steep hill. I’m just at her place a few hours when the rains arrive, settling into the cozy couch in the living room. Sleep comes easy tonight, with dreams of the miles and miles and miles, the vistas afar, and the sweet smile of my beloved. 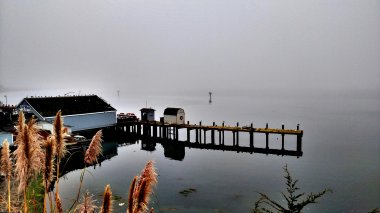 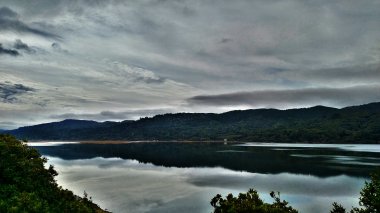 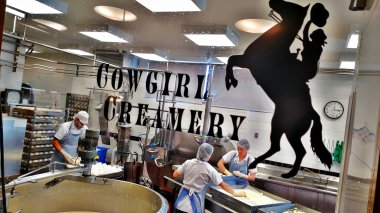 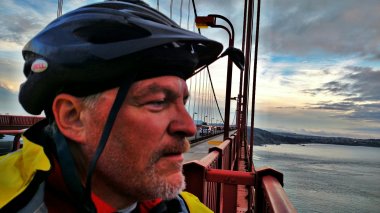 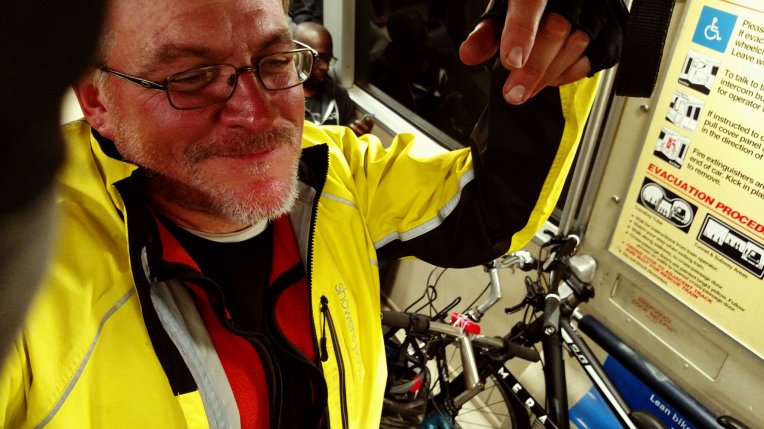