I’ve ended the last couple tours with a bit of a marathon dash, long rides because I can, because I don’t want to stop the trip. This time, I decided to add the traverse of the Big Sur coast, and in just two days cover nearly 140 miles of mountainous cliff side highway. I covered the same itinerary in 2013, heading north back to San Francisco from Southern California. But this year, I have trepidation: am I able, in shape for such a rigorous ride?

I set out early, on the road by 630am, to open Heather’s Patisserie, great croissant and coffee. Then on to the Pacific Coast Bicycle Route around Monterey Bay. Crossing Route 1, I see a traffic jam stretching for miles, commuters heading North. Silly car bound people. If only the freeway was filled with bicycles. No sooner this thought than I’m joined again with dozens and dozens of cyclists, the LifeCycle tour again! Constantly they pass me, calling out “On your left, Rider!” Gets a little annoying, but the odd “How far are you going?” helps. I’m about 2/3 of their speed, a tour with sag support is such a different experience.

I ride with the LifeCycle until I reach Marina, and they peel off North towards Highway 101. Suddenly, alone again. Getting used to the transition. I roll into Monterey and to the East Village Coffee Lounge. A miniature castle, serving up great coffee and food. Time to charge up the batteries before heading into the wilderness of Big Sur. I’m also taking more breaks than normal, resting my legs up before the next climb, crossing Monterey Peninsula. Slow going, but I know what is on the other side, a rapid descent and Big Sur! I’m excited to see the spectacular coast again.

I ride past Carmel, then through the Carmel Highlands, gradually approaching the first of many hills in Big Sur. The vistas appear, clear skies reflecting in the turquoise shallows and deep blue fathoms. The scent of pine and eucalyptus mingles with brine and kelp. The air is cool, which aids the climbing and so refreshing on the descents. Car traffic is heavy, and I realize all my prior rides have been on nearly empty highway, touring in the fall after tourist season is past. I ride with extra caution, hugging the shoulder, where it exists, getting off the road altogether when many vehicles pass. This makes for slow going, but also allows for more time to stop and gawk at the stunning views.

As before, I’m so thankful for being able to cycle this highway, to stretch my body and mind past my normal limits, to experience such an adventure. Car passengers know nothing of the true splendor of this coastline, stopping just a few times as they race along the roadway, more likely feeling car sick than satisfaction of the grueling climbs and exhilarating descents, only a bicyclist can know.

The last climb appears, over a high vista, then a quick descent to a beautiful beach, cattle grazing below. A beautiful forbidden beach, as the NO TRESPASSING sign reminds me. I think of Woody Guthrie’s song, “This Land is Your Land”, and also of the incredible Oregon Coast, every mile preserved for public access, starting in 1911 with governor Oswald West and completed in 1967 with the Oregon Beach Bill. Oregon author Matt Love has called this one of “socialism’s crowning achievements”. I agree, and here see what privatization yields, no access. The same is true of the beautiful beach near Point Sur, a few miles later. Sigh.

The last few miles I enjoy a high tail wind, blowing me up the gap and into southern most redwoods of Big Sur State Park. I meet other cyclists there, a couple I met along the road. But I’m worn out. I set up my tent and collapse into a well earned sleep. 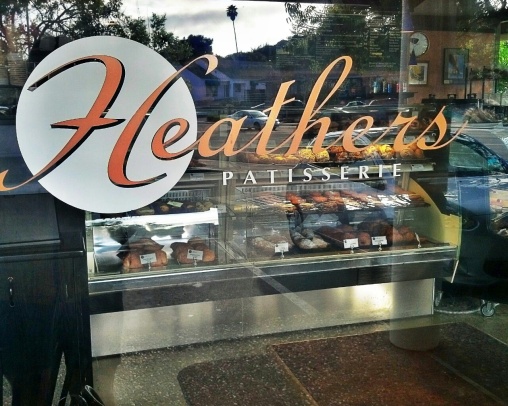 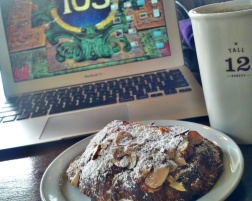 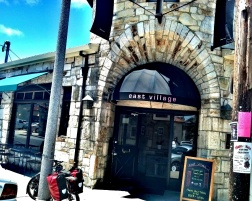 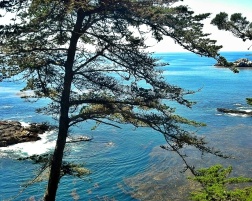 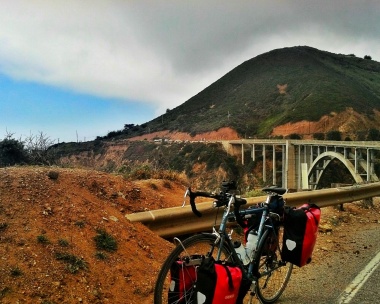 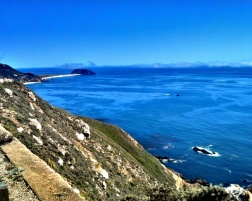 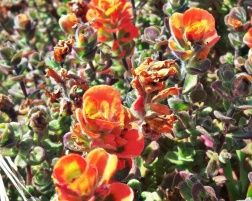 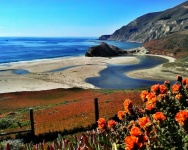 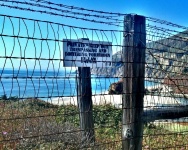 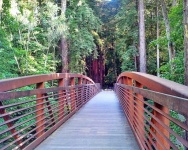