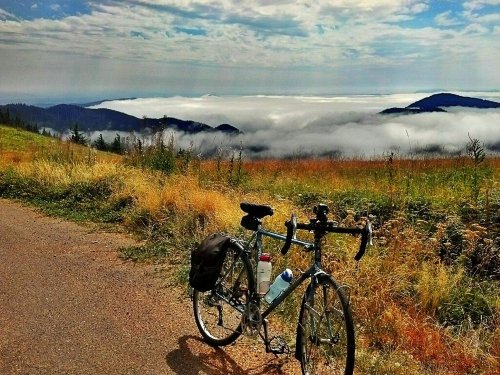 “The place where the spirits dwell.” According to local telling, the native Calapooia named Mary’s Peak in accordance with the sense of awe and inspiration. But they told the advancing Europeans that the name Tchateemanwi meant “mouse mountain”, perhaps to dissuade the invader’s interest in plundering this holy ground.

My brother James and I cycled to the summit today, starting from Timberhill in Corvallis. An early start, crisp air, overcast skies, a headwind all the way to the base of the “Highway 34 Curves”. Then the slow, grueling climb, 12 miles to the summit, grades approaching 9% in some spots. Nearly 3 hours of climbing later, we were rewarded with a stunning panorama: the view above the clouds!

A quick snack at the top: clif bars, bananas, cookie, rice cakes. Then we turned and began a speedy descent, covering the 10 miles of Mary’s Peak road in 1/3 the time it took to climb, and a lesson in how weak my hands felt, unaccustomed to the long braking required. Then we screamed down the Curves, banking hard on the highway, literally leaving the cars behind us in the dust.

Later a friend told me I’d done an epic ride. To me it felt like a longer hill, but one of many, so many. I guess I’m mostly ready for my tour, faster than I thought!