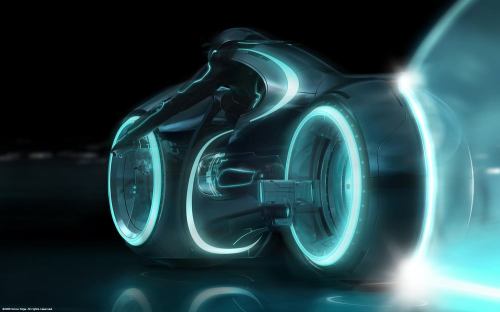 I guess I need to come clean.  I am an nerd.  More specifically, when I was in high school I was a “computer nerd”.  Yep, one of those geeky kids who was enthralled at the new technology, spending hours on the school’s teletype playing Adventure on the district mainframe.  So into it all was I, that I built two computers, from scratch, one which I programmed in binary – the 1s & 0s that make everything digital tick.  Machine code.  As primal as you can get.  I was a sophomore at Philomath High. The year was 1978.

When Tron came out four years later, I saw it at the Whiteside in Corvallis, the currently moth-balled historic building which a local band of dreamers wants to convert into a community venue.  They’re having trouble raising the $2 million or so needed to retrofit the building for seismic stability and subterranean sewer repair.

Tron was the first movie to use extensive digital special effects. The movie was an adventure based on the premise that computer games in real life are being played out by programs like gladiators in the computer realm. I was entranced, throughly enjoying the flash and jazz of the effects, but moreso the numerous puns based on the jargon of the computer field which I was studying at Oregon State University.  Tron was a movie made for us – the computer nerds.  Sure, other people could enjoy it, but only we computer nerds knew the secret language being used and played up.  Only we computer nerds really got the jokes.

Flash forward to 2011.  Tron Legacy.  Blew me away!  But when I saw it with Seth and Shawn, their response ranged from tepid boredom to complete disinterest.  When I asked them why, they said the story wasn’t developed, the characters were weak.  Then they told me they had never seen the first Tron.  Vintage Tron.  I however had a totally different experience, on so many levels. The computer nerd connection of course.  But also, the new movie is the evolution of the original characters, now aged 29 years.  Like me.

SPOILER ALERT: Jeff Bridges plays Jeff Flynn, who has been trapped in a digital world by his evil doppelganger CLU.  A classic tale of splitting off the self into different parts, who then engage in conflict. Also present is the father-son drama, a young son growing up in the absence of his father, later finding him trapped and seeking to rescue him from the digital world.  And of course there is the high-octane action of video game battles, between souped up light cycles and light jets, disc wars and fairly decent dialog and storytelling, as far as sci-fi goes.

But Tron Legacy is really a movie for us, the now-grown computer nerds of the early 1980’s.  We really dig the retro references, the continued computer jargon puns.  Even Flynn’s original Light Cycle is there, referred to as a “vintage” model.  “He doesn’t get out that much” is an understatement, as he is exiled in the distant outer realms, off-grid.  When Bridges talks of the spontaneous manifestation of digital life forms, the Isomorphic programs or “isos”, and calls them “bio-digital jazz, man!”, I really felt the rush, the excitement of his zeal.  And also his sadness of decades lost, seeking a perfection which is “unknowable, yet right before my eyes.”  A quest which threw everything into peril.

If you’re going to see Tron Legacy, please indulge us computer nerds:  See the original first, watch the DVD, do your homework.  Get ready for some amazing eye candy, with a electro-punk sound track that will make you want to get out of your seat and boogie. But the best thing you could do is to take one of us with you – a vintage computer nerd – so we can help you interface with this new software, a reboot of the original vintage computer graphics movie.  Take one of us, and watch us light up, like the blazing glare of this digital effects masterpiece.  Radical, man!
_______

Afternote:  I’m writing this from the Amtrak, stopped in Sacramento.  I’m heading to a workshop with Stanislav Grof on Holotropic Breathwork.  Yes, I’ve brought my vintage Miyata with me, and will be riding around SF and then down to Santa Cruz after the workshop.  Stay tuned for more from the Vintage Bicycle Odyssey blog, as I get back on the wheels today!